Can I use Midifighter 3D with my OP-Z?

I’m super new to the DAWless music world and music in general and have a question about my set up.

I have an OP-Z (with the new Line module), a PO33 KO and a Midifighter 3D. I recently got the midifighter so I could finger drum during live sessions, use the sequencer more like the PO33 (a 4x4 grid as opposed to a horizontal line) and preserve my OP-Z’s buttons in the long run. I use an Apple USB-C adapter to connect the midifighter to the OP-Z and the Line module to sync the KO and everything is powered by the Kingston Nucleum.

When I use the Midifighter, it tends to work well at first but then I notice a few issues:

-the drum sounds record to the symbol track and won’t record to any other track (it’s wild that it will record kick and snare sounds to that track!)

-the Midifighter will make noises without me pressing a button—like I got a ghost or something!

I did a factory reset on the Midifighter and thought that would help but it hasn’t.

I guess my questions other than (wHaT’s haPp3ninG?!) would be:

-Is it possible to have the Midifighter 3D and OP-Z work together or are they fundamentally incompatible?

-Do I need to configure something on the Midifighter Utility app or the OP-Z’s MIDI CC settings?

I’m attaching a picture of my set up below for reference. If a video would be helpful, let me know and I can upload one! Hoping these fixes are beginner things I just don’t understand. 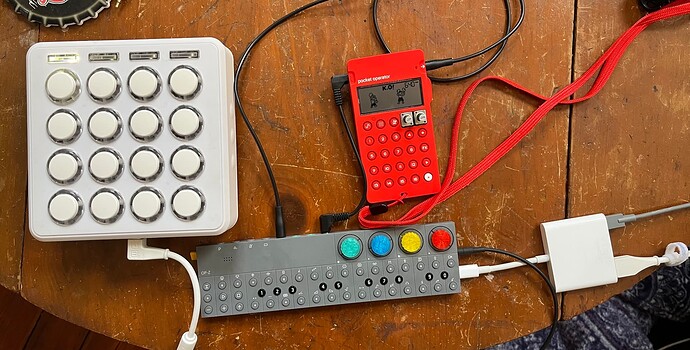 -the drum sounds record to the symbol track

try turning off the “channel one to active” midi setting. (press the metronome and screen button, disable the 1 key)

Yeah, get your midi channels sorted out. The OP-Z is great with MIDI, but the setup can be confusing sometimes.

I also find OP-Z midi glitches a lot with Ableton when I also have the OP-Z app open on my Mac. Not sure if that might help in your case.