OP-1 Collaborations
LyingDalai July 27, 2015, 8:31am #1
Hey there, just wanted to share the joy I feel...
In my town, main culture has been soccer for decades, and in the past few months I attended twice to a concert where I was the only guy in front of the stage...

Thus I am so glad to have found in this desert someone to play with !

And what amazes me is that it's someone actually skilled

Yesterday was the very first jam session with Tamaris and while he's used to produce on Reason, he had much fun on my Analog Rytm

I can state now that this machine has been really well thought, as within the hour after my quick explanations he was able to go quite deeply in the settings.

I used the Octatrack to improvise on the Volca Keys + Bass, the Shruthi-1 and my brand new Blofeld. No sampling yet, just MIDI recording and messing with effects so far.

No OP-1 : I understood how to control it from the OT, it works OK, and I love the sound I can get from it, but for some reason the volume level was quite low and I didn't want to spend time and identify what was wrong. So I let it aside.

Here is a track I made after he was gone with the remains of the jam session :

Thanks Needles, I’m glad you like it ! It seems a sweet collaboration is on his way

Really cool, @LyingDalai. It´s very good to meet someone with the same musical and hardware vibe that you´re into - and you learn a lot from that kind of experience.

As we share a similar setup - I´m also using the AR + OT, the OP-1 and the Blofeld - maybe I can help. I´ve already struggled with some low signal problems with the OP-1, specially when inserting it direct on the AR input. What I´m doing right now it´s an equilibrium between Drive (aprox. 60, which don´t insert so much noise and artifacts), Track volume (99) and Master Volume (15 hours). Going inside the AR via the Octatrack is easier, as you can use the OT resources to boost the signal.
LyingDalai July 27, 2015, 10:16pm #5 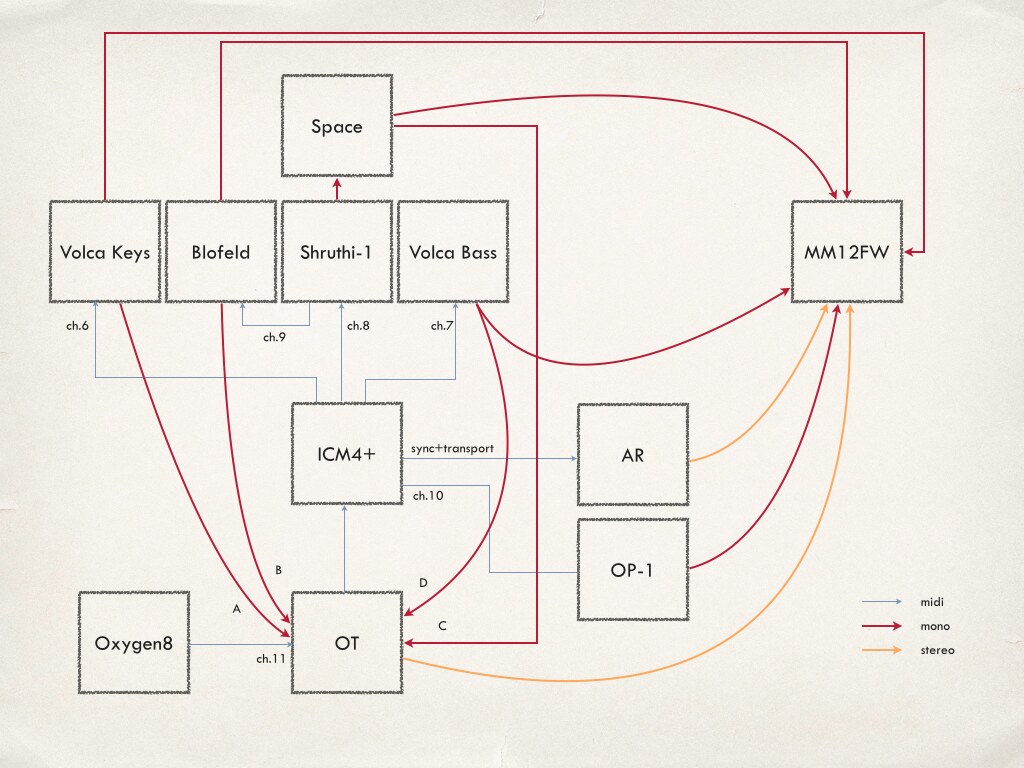 So far, I plug 4 synths into the OT : Blofeld, Volca Keys, Shruthi (through Eventide Space), Volca Bass.
Now I found the way to tame each one and get similar output levels… Oddly enough, Volcas have an important place, one as lead and the other as killing bass. My new friend used to underestimate them, but they have real sonic power !!

I tried to get OP-1 signal through the Space but as Shruthi is shouting loud, it completely overwhelmed the OP-1.
Plus I would have shared OT C-input between the two synths, which is not cool.
So now I just plug the OP-1 directly into the Multimix 12 FW.

On the MIDI side, everything is OK : OT is controlling all the synths with the help of a iConnectMIDI4+ hub.
I use USB to plug AR into ICM4 so that it leaves a MIDI port for the other synths. Shruthi MIDI thru goes to Blofeld.
My next goal is to use the QuNeo to access on AR both Scenes + Mute + Performance at the same time, and thus avoid switching from one to the other. Al the difficulty is get two main routes within the ICM4 : one MIDI route from QuNeo to Rytm, the other route from OT towards synths. Those two should not interfere but I want syc and transport to go to AR.
This is some ICM4 configuration, but so far I haven’t succeeded in creating this.
Plus I regularly reset the ICM4 as it is usually messing with the USB signal when I switch it on.
spacetravelmadeeasy July 28, 2015, 3:53pm #6

The track from the jam is really nice!

@LyingDalai there´s no way right now to boost the input signal on the Analog Rytm. It´s really a shame (considering that it´s a obvious need) and a problem. Maybe with the Overbridge they will offer us a solution, although I don´t know if it´s technically possible (need to check the AR architecture).

You did a nice scheme of your setup, I need to draw something like that (although my connections are more mutable right now). About the OP-1 gain, did you tried to pass it trough the Octatrack? I managed to achieve reasonable results with the configurations that I exposed before (Drive 60, Track 99, Volume 15h), and better results using the OT gain/drive/amp.
HisMostDarxxxellent July 29, 2015, 11:17am #8

Yes @LyingDalai, I popped your music on and really enjoyed the sound cloud playlist after the tune link on this played through. There are many really great moments.

Thanks for the stimulation.

@LyingDalai, how did you draw the setup scheme diagram above? It looks great

I love the elegant diagram too.

The diagram was done on Keynote, things get nice pretty quickly with this Apple Powerpoint

@HisMostDarxxxellent I’m glad you found some nice sound on the soundcloud, I look forward to drop more and more now that I have found a comrade and a way to plug all my stuff together…
@aeoner The problem I encountered was that you set incoming gain both for A&B / C&D. I have to pair synths with similar output level to get it right. So I think I’ll just plug Volca Keys and OP-1 together, as they are rather low level compared to the other…
One cool thing I found was to get both Blofeld and Volca Keys on the same MIDI channel : playing them both was really great, I love the mix of analog and digital !
Now I’m in holidays so I just play the OP-1 (when my kid isn’t messing with the Tombola or trying to get the notes from “Une chanson douce” with it). As fun as OP-1 is, I must admit that I miss the Elektron a lot, especially the Rytm.
@LibertineLush, I read you were hesitating with the A4 : get a used one, being sure you can always get your money back if you don’t like it… These machines are really great !
LibertineLush July 31, 2015, 9:31am #12

The diagram was done on Keynote, things get nice pretty quickly with this Apple Powerpoint ;)

I’ve never even opened it before. I launched it just now. It doesn’t appear your diagram is based off any of the templates or is it?

The diagram was done on Keynote, things get nice pretty quickly with this Apple Powerpoint ;)

Very cool - thanks for the tip!