Something I thought of while messing with tape. I hate bouncing stuff with ear. Too many button presses, plus you need to wait for stuff to play. How could bouncing be implemented better? Simple. You SHIFT+CUT to lift several tracks as usual, then SHIFT+PASTE to past them into the current track all mixed together. From what I see, currently SHIFT+PASTE doesn’t do anything at all.

Haha…just finished filming a video on feature request ideas. This should have been in it!

That’s a great idea and solution! 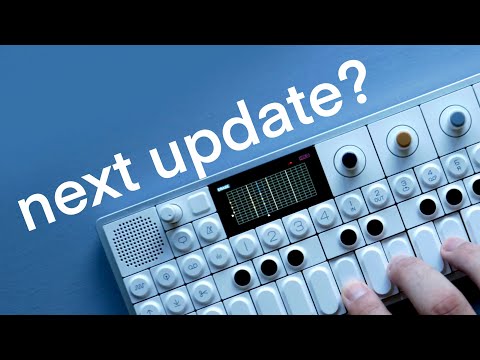 put together a few feature ideas in this video

Have you managed to solve your unbalanced output issue?

filled out the RMA and will send it off soon.
edit: so no, the problem persists…it sucks

Damn, was hoping it was an overlooked setting or something. Best of luck

there’s already global de-tuning. It would be so easy to make it so you hold down a key on the keyboard and change the tuning for that key (and repeat for as many keys as you want) which would be implemented in whatever synth you dial in. Voila!: instant Microtonal op-1 field!!!

A simple shift-lock feature would be nice to allow for easier fine-manipulation of two parameters at once.

Also the Value LFO’s “sine wave” is still not a true sine wave, it’s got that funky asymmetrical shape like on the OG (I don’t have the synth in front of me so going off memory so I think this is right). The Tremolo LFO’s sine wave is nice and normal, which is something I’m finding myself needing often to manipulate other parameters.

Saving the entire “state” of the device without a computer would be really helpful but that could be asking a lot. Im thinking just for synth/drum/mixer setting templates, not anything that affects the tape audio.

An effect to add saturation/distortion, ideally using the existing tape-sims.

I actually enjoyed (mostly) the EP engine on the OP-Z while I still had it. I think it could be greatly improved upon, or completely reworked and launched as an OP-1F engine.

I’d slap the Trem LFO and a spring reverb or CWO on that in a heartbeat.
Wouldn’t mind a dedicated phaser effect along with it? tho I feel that CWO is pretty widely flexible.

I’d love this. We have the string model, EP model too please.

I’m not surprised that works. GarageBand is Logic-lite. Apple bought emagic to make GarageBand back in the day. PC Logic users were furious haha

Count in for recording.
Punch in and out recording.
Support for odd time signatures with the metronome and tape grid markers.

Count in for recording.

You can so this by starting the tape a bar early.

Punch in and out recording.

Just hold the REC key while you punch in, release when done. I do this all the time!

Count in when up against another part record overdubs it.

I am playing guitar so I can’t hold the button down to punch in.

You can record over a section and it won’t record if you’re not playing notes. Because it always merges / overdubs then start playing at the right time. Unlike real tape which most of the time erases what was there previously.

Guitar usually has some noise even if you’re not playing, which mounts up.