its just out of stock from your retailer…

Or are they going to release a MkII with a latch similar to the Rumble module (and thus have discontinued the original SKU)?

maybe. the Rumble module is also made out of this fiberglass/plastic material like the OP-Z itself.

would be nice to see the same price tag.

but let’s say it’s discontinued, you can easily get CV/Gate (3xCV & 1 Gate) with the OP-Z from the Quenxus as shown at the end of this Video…and a used Qunexus goes for around 100 bucks + expander for 30. 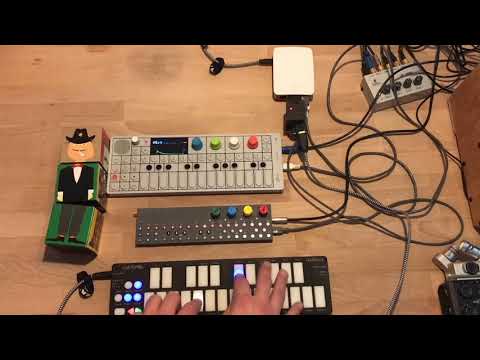 I guess it’s because of their communication between the retailers, when my OP-1 had a repair the rep reps told me that they hate the communication with TE because sometimes nobody’s answering their questions and I can understand when customers have no interest in such info.

its been out of stock every where for over 6 months

I concur, they must have really pissed someone off to lose Sweetwater as a distributor.

Is their customer service reputation bad? I only ask as I sent them an email on the 18th…no reply.

It’s difficult to get someone to reply and maintain conversation in my experience, but when they do get back to you they tend to be pleasant enough.

That has been my experience, nothing serious, just asking on firmware and stuff. Got a reply within 5 days (could be improved, but still) since opening a ticket, and a second reply 3 days after my response. Both of them super pleasant.

Again, nothing like a return or something, just asking on patches for OP-Z synths.

I did have a bit of a bad return experience recently in the fact that I had to send them an email every day of the week and then call and send a follow up email that I had to email and call them to get a response.

It’s pathetic really. I’m on two emails and ten days with nothing.