Hi all,
First topic, as I’m new here, so hope I’m following the rules.
So I purchased a second hand OP1 end of January and been loving it so far. Since a few weeks I’m commuting again and I thought it would be fun to spend the time on making tracks on the OP1.
I was wondering if some people here would like to join a challenge where the idea is to post a track which you made while commuting.
I checked out the battle category and those are awesome! This is more like a laid-back version without too much competition; just finishing something in a limited time-span is the idea.
My plan was to post an update on the tracks I made a few times a week for as long as I feel that this challenge is fun.
For those of us who are in a home office situation; I guess you could make it work by setting a timer or so?

Hi psound,
Thanks for your reply. I like your commute jam! It’s noisy in a good way in the sense that it has nice harmonic progressions.
I’m interested in what your process was; was this one commute or multiple? What did you start with?
https://soundcloud.com/johnglib/op1-needs-voice-maybe-guitar

Here is my upload. I know this took me several commutes and I think I started out with the bass. After a week I took some time in the evening to record and transform the vocals in ableton. Further processing of the album record in ableton with compressor, reverb and some EQ. Although it would have been nice if I had done some more EQing and mixing of the individual OP-1 tracks I think.

Am working on a song now for which I take more time. My commute is pretty short so only like 15 minutes to finish a piece. I like the time constraint though (I’ve become a pro in packing my OP-1 up real quick so as not to miss my stop…)

Sure! Dig the Radiohead “Kid A” kind of aesthetic here…really liked the gritty nature of the high end sounds, was that OP-1 by itself or alternate side effects of the Ableton vocal transformations?

While i had stumbled on the DSynth patch that had a LFO sweeping the lower left “2” “M” control that i tweaked and found that having the o-oo and Trig settings in the Arpeggio sequencer and playing 4 notes made some notes sustain longer than others in an interesting way about a couple weeks ago, i came up with & sequenced the chords, drums, and played the bass live into a loop then added lead live while recording to the album all in a little less than the 2 hours i was on the train!

the drums are SK-1 samples being warped by the “hidden” filter effect modulated by the random LFO; Endless sequencer started by key-press to transpose the slowed down “cymbal” hit and bass drum to be “in-key” with the root of the chord each time it changed. Bass was made by loading a patch with the hidden filter then pressing Shift-1 (change engine) to Sampler and picking the “punchsub” preset but then having the Element LFO set to Envelope and modulating the filter cutoff. Lead was a sample of the Moog MG-1 “poly” section (basically a square wave) played live again through…the hidden filter…can you tell i love that effect? (To me it seems more musical than Nitro and the Drive control can add some nice grit.) - all through the Spring reverb in the master section with a bit of EQ boost on lows and highs, Drive 16, Release 150. The only thing i did on the computer was normalize the Album file.

Keep at it! What was your workflow like (in the OP-1, to and from Ableton, what effects, etc)?

Hi psound74
Sorry it took me a while to come back to your post. Thanks for sharing your process. Makes me really want to put the hidden filter on my device.

So I took a screenshot of my ableton session because I couldn’t remember too much of how I processed it. The vocals are all done in ableton; recorded with mic into it and processed with vocoder, compressor, filter. The first track is the album track from the OP-1 which I EQed a little and put a compressor on.

So for this week my goal is to work on shorter pieces; just one groove but make it more elaborate. My commutes are pretty short so the challenge is to stay in the same groove over multiple days. Will post something when its finished!

Oh yeah, I remember the high pitched instrument on the OP1 was manipulated with the tremelo LFO set to very high frequency and depth on the volume. Can’t remember which synth module it was…

Any feedback is always welcome

Looking forward to another entry of yours, psound74, or who know who else will join us. 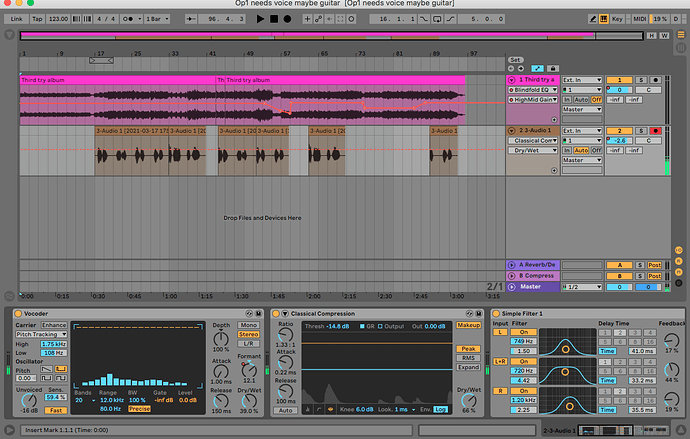 Hey there @rocksoul !
Thanks for sharing your process, i appreciate it!

Wow that’s a very wide sound you created psound! Good job!
I like how your different instruments take over from each other to create a feeling of forward momentum.
As for me my commutes have mainly focused on trying out some tricks from the trick-thread in this forum and experimenting with some engines. Not very result-based I’m afraid…

Thank you for the compliment! As for “results”…Keep at it! i tend to throw everything (tricks, sounds, musical ideas) into my tunes, so judicious and meticulous stereo (often hard) panning, effects, play mode (poly, legato, unison) and arrangement of parts (trying to leave room in one part for another!) are all necessary!

You can always post little WIP (work in progress) demos as you go and pull them down later if you officially “finish” them…sometimes the process is useful to document!

Hi psound (and all the others tuning in),

Thanks for the little push to continue composing/recording. This week I recorded two tracks onto the album; forced myself to finish it while commuting, but also incorporating the tricks I’m trying out while doing so.

So the first (commute2town) was mainly trying to make an evolving composition by copy pasting one loop and then selectively muting some parts by just lifting them out of the loop. While recording to album I played a synth patched I created by sampling a simple sine-wave; distorting it using shift orange in sample and then adding the compression from the crank-LFO - orange. On M1 I used a hard EQ leaving out highs and lows I think.

The other one I was inspired by your comment of leaving room for other sounds; I’m usually not very good at that. So I started out with some chord stabs, then added the bass with endless on 1/32 notes I think. I then added a sample from a billy talent song which has this very nice gritty guitar sound. I wanted to try out a different endless setting for the drums toward the end so I put it on 1/8T and with the white controller went for the 0-0 setting, which gives kinda a 6-8th feel.
When I was ready to record to album I decided to start the Intro by reverse play, starting from the gritty guitar sound to the beginning of my loop. The recording turned out to be a little longer cause I wanted to try out the following; start a pattern arpeggio on drums, so I could scratch the tape (with loop in and out close to each other) while there was still some drums playing in the background. Then by accident I ended up on a bit of tape which had this nice lo-fi vibe to it and added a synth chord to round it of (switching synth engine while holding the chord to get the sudden change of sound).

Huh, while writing this I am confronted by how much is happening really when you improvise on the Op-1. Great fun!

Oh and while commuting I also noticed my shoes have the same color-theme as the OP-1, so I decided to add a picture of them to the playlist

Keep me updated on your OP-1 commute adventures! Great fun to read and listen to.
Rocksoul

Nice work! i have to get more into the live “mixing” aspect of the OP-1 more (muting, the M1/M2 keys, etc) as i usually am more “through composing”

Like your second Co - Mut3 piece a lot, atonal, spastic, some gnarly sounds!

Just came back from Upstate home to Brooklyn for some site work; trip up and back 4.5 hours and just got a little over a minute. MG-1 sync sample for the lead, TR-707 clock signal square wave sample for the left-panned Pad, “CIRCUIT BEND” drum kit through the “Phone” FX. OP-1 synth engines: FM right-panned pad, Voltage and DSynth overlapping left-panned sweep basses. Was practicing leaving room for different parts (sometimes better than others) and a more “Romantic” set of chords.

Keep up the good work @rocksoul! Anyone else out there want to join in?

Making a point to bring OP-1 with me when i don’t have to bring too many tools to work…latest commute composition (this was a few days to/from work!)

Love it psound! It’s awesome how the background is very dense and intense, and then the melody is light and simple. Nice balance!

So I’m wondering, how much do you use the internal synths compared to the sampling of synth/drums? I find that your sampled sounds come out real beautifully and was wondering on your take on it. When/for what would you use internal synths?

I recently decided to do most of my commutes by bike as a training for a biking holiday. Haven’t managed to find a way to combine biking and OP-1ning…

Just before that I tried some things with sampling my voice and than modifying it while commuting (I’m not so badass to sing in the train). The singing and lyrics were than loosely based on the vocal chops:

@rocksoul,
Nice work! Like the lyrics and the little background vocal chops!

In this latest one, the subway chime, one pad sound (arpeggio in right channel), high string lead at the end, and the TR-808 and TR-909 drums were samples, all other sounds (including the 2 synth leads and the “piano” lead) are the internal synths! (FM, Pulse, Iter, DNA, and String)

i tend to use the internal synths maybe 60-70% versus samples for pitch sounds and near 100% samples for drums & percussion, the Drum Sampler is pretty flexible!

Keep up the good work and enjoy your biking holiday (probably best not to combine OP-1 and biking!)