At 53 seconds in this video Max mentions that there’s a lot more coming in the series… So what we got? OP-ZF and what else?? 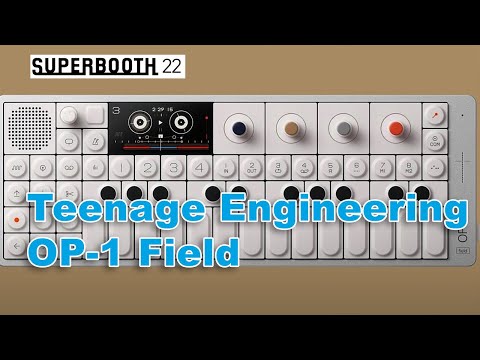 Glad you made this post; tx-6 and op1f are cool but I’m way more excited about the “field series” in general and whats coming next

Im really really hoping TE finally make a handheld multitrack field recorder/microphone that takes cues from the op-1 tape system; that is my dream product and I’d probably sell the op-1 for it as I only use the op-1 for its tape nowadays. I’d pay tx-6 money if it had pro level preamps/drivers and built in effects

I think it would also fill a gap in the market for sleek modern ui and easy/fun to use field recorders that work more like tape cassette/nagras then just plain digital recorders; zooms/tascams/others all have great features to spec ratios but they are all so clunky and old fashion to use, and not fun (like the op-1 tape) so If TE made one it would definitely stand on its own in the market.

I’m also curious about the release schedule for this “field system”; the op-1f was announced pretty quickly after the tx-6 so I’m really hopeful they have the whole system of field product released in the next couple months…they are already showed white OB-4 which would probably be another thing for this field series…

what do you think?

its really hard to tell what might be in the series- the tx-6 came out of nowhere! that being said, tx-6 does seem to capitalize on some of the work TE did on the kanye west stem player design. and so i can kind of only really speculate on updates to things i’ve seen before from them…

i haven’t seen the white OB-4 yet (where did you see it?), but one thing that a OB-4 field might have is a line out? that seems to be the #1 thing everyone wants from the original OB-4.

i wonder if a field OP-Z might finally have the 8 audio outs over usb, that’s another feature that everyone has been screaming about ever since the Z released. and if there is some sort of field recorder like you’re saying, maybe the Z would interface with that to have 8 audio tracks. of course maybe there’s already some sort of functionality between the Z and the TX-6 to have all 8 tracks of the Z split for recording on iOS or something over usb.

would be hilarious if TE dropped an easter egg into the field line with the release of the off-white bomber jacket and cargo pants… they both had pockets all over them to hold TE gear. maybe each pocket represents one item from the field line!?

seems they are positioning the field line as portable and yet with professional sound- following that and looking at their other products, would look like the pocket operators and OD-11 would not get a field version. though of course the pocket operators are so extremely portable, would be so fun to have some sort of field version of one of them with extra or deeper features.

as well would be fun to have a field pocket operator modular. and if the game of the field series is to update or use their pre-existing r&d, they already have a lot of work put into the modules.

it was cool to see in the op-1f guide that because it now has bluetooth it will work with the ortho remote. i use the ortho with my OB-4 all the time. was sad when i couldn’t get it to work with my OP-Z when the Z came out.

the only other thing i can think of that might get some sort of field version is the M-1 headphones… TE has always kind of played around with headphones (as an accessory to their products, along with all the other accessories they’re into). i could totally see a M-1f version to compliment the line.

someone should make a render of the OP-Z with updated colors on the encoders which follow the new field color palette.

yeah when the tx-6 was first announced as the first product of this field series I definitely thought it would be a line of completely new products but the introduction of op-1f has definitely opened up the idea of its being a series to update their previous portable products with more durability and features for professional outdoor use; and for that the op-z is definitely the product that would benefit the most from this.

With that being said, I’m probably in the minority in hoping that’s it’s more new products then updated products; I think the op-1f is an interesting exception in that it is there oldest product and as such the one most in need of a technical update which it has finally got after 10years - I don’t really think it’s TE’s style to update their existing products so soon like some other company’s do (except for special editions like the off white ob-4 collab) so it wouldnt surprise me if the op-1f is the only updated product in this field line but again, a op-zf is definitely the next product most in need of an physical upgrade and would be a great edition to the field series - I agree the POs and OD11 don’t suit the vision for this

Im wondering if an fx-engine / amp simulator would be part of the series. I guess its built in the tx-6 already but then they also included a synth in the tx-6 so abundance is apperantly not a problem.

Only speculation but I’m expecting a tracker device in their new field series, some kind of gameboy device with a modernised version of LSDj made in collaboration with Johan Kotlinski…

Maybe in response to the Dirtywave M8 success…

Though I’m not sure Effects are TE’s strong suit so idk about a dedicated FX unit.

I really like the OP1 spring reverb. Is there a real spring in a box sort of reverb in real life?

Is there a real spring in a box sort of reverb in real life?

Yes Spring reverbs were one of the earliest types of ‘fake’ reverbs that were available I believe. I’m not an expert but there is more info available here: Spring reverbs, introduced by Bell Labs, use a set of springs mounted inside a box. They work similarly to plate reverb, with a transducer and pickup placed at either end of the spring. They were popular in the 1960s, and were first used by the Hammond company to add reverb to Hammond organs. They became popular with guitarists, including surf musicians such as Dick Dale, as they could easily be built into guitar amplifiers. They were also used by dub reggae musicians such as King

Both the Moog Grandmother and Koma Elektronik’s Field Kit FX work with a spring tank reverb. When using hardware it is quite easy to feedback signals, and you can also hit the unit and get a monstrous sound which is awesome!

Real spring reverbs are amazing, but I think the spring in OP-1 holds up fairly well. Will be interesting to hear it on the new OP-1 Field!

I took some time and recorded a drum beat through the OP-1 spring, Roland RE-501 and Vermona RetroVerb (driving the signal at the end). Nothing gives character quite like a spring reverb

Nice.
Really love the Roland one in particular. Not quite sure why…

Thankyou for that. That’s awesome.

No real response from TE about an OP-Z Field

a couple blurred items here which could be for the field series;

BONUS; also spotted a dieter rams book there in case you don’t know where TE get their style from

Well spotted! I think that OB-4 is the off-white collab version though, as the white version (from superbooth) has a black handle and top

A pocket oparator field line would be great, particularly a K.o. 33 field

I’d love to see a high quality headset with a really good mic in it.

…and about the OB-4s in the picture:
The left one looks like the off-white version, but the one on the right could be white (as in being the color white)

It would be great if they had a more detailed manual than the basic one included.

Had to watch a lot of different vids just to get some of the tricks down, and I still don’t get how the internals work for the patches/tapes and where things get stored.

I’m sure some know here, but I haven’t heard from them