In case you haven´t seen it yet, I made a cross platform app for OP-Z that eports patterns and complete projects sequencially to wave files directly. Win and Linux for now with Mac version coming soon. 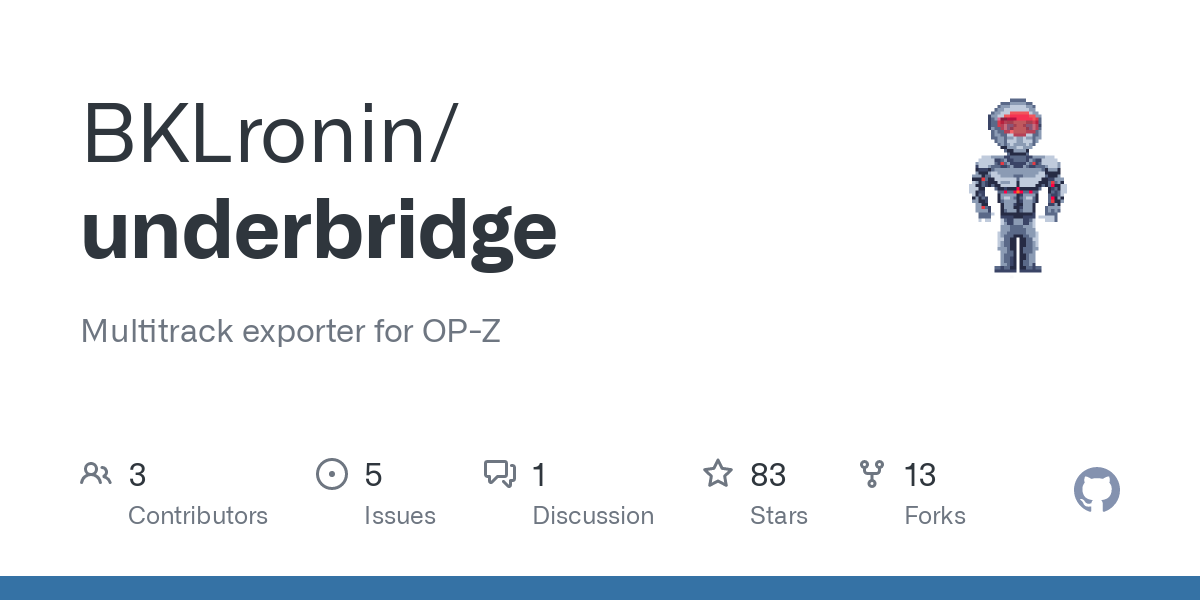 Multitrack exporter for OP-Z. Contribute to BKLronin/underbridge development by creating an account on GitHub.

So cool! Can’t wait for the Mac version!

I dont have a mac to make a package myself but a contributor is already working on it.

There are install instructions to run the program as python file on mac directly as long as the executable isnt ready.

This looks amazing. I use a Mac, but I’ll give the Python version a try.

This is great, thanks for your work!

Wow thanks for this. I’ll give it a go.

Hope the mac version will be out soon

I’m working on it right now.

Mac version is up in the /dist/ folder. I cant really test it with the op-z though. It at least started in my vm.

Thanks!! Will test it this week

massive thanks and respect for this. Look forward to trying it out later.

The Mac version is not running (it’s a big text file 20MB) Is this a standalone app?

I just double clicked but sou can try to make it executable via properties or run it by ./underbridge_mac

To the javascript developers out there, you could build this all in browser, at least in Chrome (which has the Web MIDI to trigger/mute tracks and Web Audio api support to for recording). It could be the “generic” solution to avoid the headache of builds for each system. The downside being you have to use chrome and probably download a zip file at the end.

But I like this solution. Good luck with the app!

I´m not a fan of any web apps in general. I rather have a offline version that still works in 20 years

Thanks for this, I got it working last night. You mentioned a pro version. I’d love to see a version that could export midi as well. I use my OPZ as a sketch pad and it is really handy to have the midi in my DAW and be able to swap out the OPZ synths for other synths sometimes. I’ve been saving both the audio and midi files out - muting all but one of the audio files and saving them one by into my DAW.

That would be really a practical feature. Setting up all channels are a bit of a hassle. I might record each midi track in the apropiate audio folder so its drag and drop.

Iḿ still working on it. Mainly on the new Midi function and the new UI.

I will announce when its ready as Iḿ finding little things for comfort here and there that I like to implement.