I’d love if they had a “meta” sequencer that would let you chain multiple sequences from any of the other sequencers. That would basically cover all my needs.

Synth sampler and drum sampler…Has the recording time limits increased for either? Cant seem to find anything in the manual…

I had seen in this thread that the overall memory has increased but sample size is still 6 seconds.

On the contrary, a video stated that sample length has increased to 20seconds

Maybe one of the beta testers could answer this?
@MichaalHell

Oh that’s great news, I hope i was wrong!

ya right here on the main page 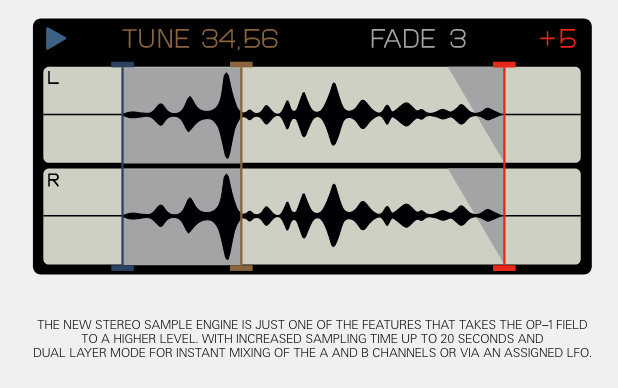 who here has first hand experience with the OP1F and can share impressions about the display brightness and UI feel?

Im hoping the synth sampler gets increased from 6 seconds. I loved the OP-1 but was never a fan of the synth engines so used to multi sample stuff in

Drum sampler has been increased to 20 seconds - great. But the synth sampler is 6 seconds. I feel this needs to increase as i used multi samples more than the OP-1 synths

Velocity needs to get implemented

The RRP is still a little high as direct from TE atm. I expect vendors like Juno to start selling these at £1750 (plus they usually have a 10% discount). This logic is based on the older OP-1 being £1400 direct from TE but Juno (and many other vendors infairness) are selling around £1100 right now.

And generally its not great buying something at FW 001, lets get a few more updates under its belt

So yeah in about 6 months time for me. Pretty excited to see these in the wild on youtube.

I’m about to add a Field to my 2 originals.

I’d ordered a 3rd Op-1 but cancelled when the Field was announced.

Not my intention to be flash about it. Just that the 2 Op-1s are my entire setup. And with the announcement of the Field I simply wanted to experience the new machine. Interestingly I’d always been a bit too paranoid to take them out and about. And I’m certainly not going to take the Field out. So my mind’s more relaxed about taking the OG’s out now.

I’d love to know your feedback about this when you get it.
I wonder how the OG aliasing sound could be missed. For instance, when I play the drums with the Endless sequencer, I enjoy playing with the octave, especially octave down with a bit of Spring reverb. Makes some nice sound, with aliasing. I’d miss that!

That’s one of the reasons I won’t consider the Field as a replacement, until/unless I feel otherwise.

I have a question for the more technically inclined.
The OP-1F has a dual 2.4GHz antenna system, I assume that’s for the radio transmitting?
Isn’t that what devices use to connect to Wifi too? I think my router has 2.4 and 5GHz.
I’m curious if that’s true, and if that means there is potential for Wifi activity on the device as well? obviously not for web browsing but maybe for wireless sample/tape transfer or something.

The radio should be transmitting on ~88MHz-104MHz, so it must use a separate antenna.

Bluetooth and WiFi do use 2.4 GHz (and WiFi does use other frequencies, like 5 GHz, as you say). It’s hard to know without prying one open and looking at the chipset as to whether it might do WiFi in the future or not, Some Bluetooth chipsets are also WiFi chipsets (most PCs and phones, for example), but there’s no guarantee, and a heck of a lot of software would be required to do that.

So the short answer is “Maybe? Who knows?” followed by “Ableton Link, please?”

If it’s running embedded linux, then much fun could be had exploring the network stack.

Imagine being able to back up the tapes to your NAS (or computer) wirelessly, and copying samples and data to it.

Wireless backups would be great.

I played with it at SuperBooth. The screen is a concern. It’s just too dim, even in shade. The speaker is surprisingly great though. There is a passive bass port on left side. Makes a huge difference.

Is it worse then the OG?

The screen on OP-1 OG is one of the finest, IMO. At least from the gear I own, apart from the DJI CrystalSky screen that was conceived for a pro use under the sun.

I used OP-1 OG under daylight without any trouble.
It would seem that OP-1f screen is less strong, though, as far as I could judge from the videos…
But I’d love some firsthand report on this point as well.