Hi all,
I have an OG-1 I bought new about 8 years ago in very good condition.

I frequently used the OG-1 to record external synths but took a bit of a break.

The last two firmwares, the ones with USB, make heaps of clicks when I record.

I downgraded to #23? (forget the last digit) which I happened to still have on my computer then downloaded from the archive on github and installed #242, #243, and #245.
After each down/upgrade I did a factory reset and just recorded 2 minutes of a 432Hz test tone with the gain turned up. Same setup each time. Nothing clipping.

I’m not talking about looping, just recording external audio to a track or to the stereo mixdown vinyl lathe thing.

Is anyone else having this problem. My OG-1 is fine and there is obviously a major new problem with the USB versions of the software.

Hi there,
yeah - we’ve been discussing this for a while with no official respone from TE:

Thank you so much! Please keep us updated

I’ve already contacted TE about the issue, now I’m just waiting and hopefully will see this addressed on the next firmware update.

Have many people on the forum done the same? I asked if their engineers were aware and they were like “yeah totally. Already fixed” and pointed me to #245’s loop crossfade fix and when I clarified I wasn’t talking about looping they went silent. It’s like asking a question of your manager, not a goods and services provider

I’ve done my best to verbally explain the issue to them and my report has been sent over to the developer team.

Now if firmware #246 comes without addressing this, then I’ll produce an unequivocal video report of the issue along with a public petition so that hopefully we will be heard from TE, once and for all.

Same here!
I bought the OG-1 1,5 years ago with #242 and recorded entire sessions on tape via the op-1 input. I usually record my guitar into it. I never experienced any crackling.
But since #243 and espesially since the latest on, i get clicks even after 20 seconds of recording external audio. This is sooo anoying.
They probably will keep the clicks and pops so people will have just another reason to buy the field.

If I had to guess I think they probably rushed the USB audio implementation and now they’re stuck with some major bugs.

TE as we all know can’t undo a thing, and their development team is probably focused on the “Field” and other upcoming products.

If it was for me I would scrap the USB audio (at least until implemented properly) and keep the recent general improvements made on #245.

The USB audio feature or some improvement to the GFX routines or both is/are obviously using too much resources and cause buffer underruns or whatever you call it. Should be pretty easy to profile. I guess if you rush out massive new features and massively market them then realise after the fact it is actually impossible to have the new features without breaking one of the main features, that the resources aren’t there, it’s very hard to take it back. Maybe they end up disabling GFX improvements when ext. audio is turned on. I wouldn’t mind at all if they quietly did that. If it was a priority there is always some optimisation you can make.
I guess we’ll see.
Roll on #246.

Actually we really need to get a group together if they don’t fix it in #246.

I hate to be all conspiracy theory but yes. I also thought it may be advantageous to a company if they had a replacement model and the latest software on the old model just happened to make it useless for a big chunk of the customers. Apple have been doing this routinely for a long time.

I really don’t want a Field. I think the new colours are gross and it seems to be built cheaply compared to OG-1. The only thing I really want in Field is tape switching. Which really should’ve been in the OG-1.

TE have come back asking me if the clicking happens when I record internally.
Now I have to put the bad FW back on again to check

On my OP-1 clicks are happening only when recording externally, whenever the ADC stage is involved.

I’m quite sure the issue is not related to processing power, because it persists even when displaying static graphics (in sampler mode).

I guess it’s either just a bug in the new drivers for the AD/DA chip, or an hardware related problem.

The fact that when they first designed the PCB this functionality wasn’t accounted for, makes me wonder if the PCB layout could be susceptible to some kind of interference like EMI or RFI from components in the usb path.

in any case I’ll stick with the OG-1, it’s design, it’s quirkiness and sound character is one of a kind!

Also I don’t care about tape emulations, to me the OP-1 is a digital beast, the refinements and perfectionism on the “Field” have pushed it into Hi-Fi territory, which is great but also killed it’s original “borderline personality” IMHO.

True. Now I’m thinking the only clicks with ext. record makes it seem heaps like interference.

I had a bit of a break. Upgraded to #243 when it was new and then didn’t use it until just a couple of days ago. But USB and analogue input are mutually exclusive so I’m sure they can figure something out.

RE Tape Emulation
Don’t get me wrong. I’m not after the tape emulations. I would just like to be able to make more than one track at a time. The one thing that always annoyed me about the OG-1 was that it doesn’t have “projects”. I love it but I would use it ALL THE TIME if I could switch between projects. I understand the TE way is to force a workflow on you. In the case of the OG-1 they want you to complete a track, mix it down and move on but I’ve always been way too slow and pedantic for that.

The kind of interference I’m talking about it’s not bleeding from USB to the analog audio path we can almost exclude that as it’s been already demonstrated that using a transformer isolator on the audio output or using a usb isolator on the usb cable has no effect over the clicks.

Also the clicks are present even when no usb cable is attached.

To add the USB audio functionality they probably had to enable the internal converter chip to communicate with the usb chip, this additional path if not properly designed or tested could be susceptible to interferences and disturb the converter chip itself causing errors in form of clicks and pops.

Anyway I agree the OG-1 would greatly benefit from some sort of project saving functionality, especially for users which are disciplined and patient enough to create full tracks internally.

Not me though, I tend to use it’s internal tape as a sketchpad for sampling/resampling and then use the OG-1 as an instrument and record with it. 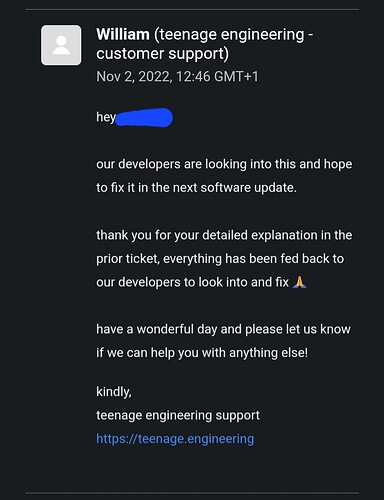 We should collect these if anyone else has one.
I have responded with thanks but also asked if there if a time frame as it seems to be over a year between updates.
I also suggested that if the software is revealing an EE issue then all OG-1 owners may be entitled to replacement/refund. 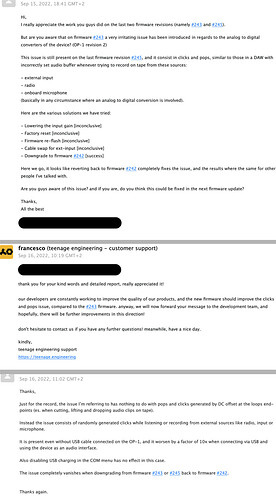 My response seems to acknowledge the “ADC USB noise” issue as something that was not addressed in #245 which is good.

Maybe everyone should try again now. Possible they would realise it is a genuine issue then.

It’s time to finally address this, I can’t believe we’ve been living with this issue for well over a year, honestly I was shocked to find it still there on #245.

It’s still not clear to me if this happens to every OG-1 unit or just some of them, would be great to collect as many information as we can from other users, maybe we can create a pool asking OG-1 owners if their unit is also affected by this issue.

Yeah I’m trying to get something going. I have no experience dealing with forums. Perhaps a post about like “If you have this issue contact TE support now so they realise it’s a proper issue”. You seem to be in touch with some people who also have this issue. Could you advise me?

I guess I should add that the question and wording of TE support seems to suggest they aware of the issue and may be already working on it.

what if its just processing power limitations?
like the external audio plus the added usb audio feature just pushes it too far
and struggles to keep up?

I don‘t think it‘s because of the USB feature since you get clicks and popps even if you record through the external jack input.

Even when looping on Tape with internal instruments i get clicks.
It is sooo annoying.