i got a chance to sit down with the op1f for the first time today for a couple of hours and i thought it might be cool to have a thread of interesting observations, likes and dislikes or things that are cool and things that could use improvement, etc… not a features request… something that already exists that could use some improvement, or something that stood out that was cool, or just an interesting observation

i’m gonna skip first impressions as they are probably similar to whats already out there and jump to my 2 hour observations:

1 - importing drum snapshots (not kits) from the og op-1, the op1f doesn’t recognize any of the slice markers of the og snapshot. this really sucks imo and i desperately hope that a new drum utility comes out. creating slice markers on it is tedious and meticulous even with the updated display. also, the display doesn’t really seem to represent the waveform very accurately which makes it even more difficult. i’ll post a screenshot later with an a/b comparison of the op1f and something like the waveform display in a daw or editor. the og op1 didn’t have a great waveform display either, but there really seems to be something unusual about the new waveform display.

2 - the overall sound of the op1f seems to have slightly more depth or bass or attack or some other quality when playing the exact same material (mono drum patch) vs the og op1. the difference is very nuanced though. maybe i’ll post an a/b audio example for folks to distinguish themselves. it could be a placebo effect but i don’t think so

7 - the og accessories (crank, fm antenna, etc) all work on the op1f. my op1f radio receiver didn’t tune any stations until i plugged in the fm antenna from the og. my studio is in a basement though (maybe thats why?). i was under the impression that an antenna was built in the op1f though

8 - the disc mini sounds more like a lossy 128 mp3 than a mini disc. it has a slight glissy breaking glass sound that mini disc atrac compression never really had

anyways, just some 2 hour observations, i’ll follow up with some screenshots and possibly audio examples of the above if y’all are interested

importing drum patches from the og op-1, the op1f doesn’t recognize any of the slice markers of the og patch

What drum patches do not import successfully? I tried grabbing some from op1.fun and that seemed to work just fine.

thanks, you are right… they (patches or kits) do work. however “snapshots” do not seem to import correctly.

meaning if you have a snapshot of a kit that you modified saved on the og op1 and import that in to the op1f, those modifications, slice markers, etc are not imported correctly. i hope its just a bug that can be fixed (og firmware 243 field firmware 1.1.6)

@systmcrsh
Thank you for the quick rundown , really appreciate you taking the time to reflect on your experience and first impression.
Could you elaborate about the audio over usb ? I’m trying to get op-z audio into the op-1f but no success so far. Maybe you used a setting that could help me out.
Thank you.

sorry i don’t have an op-z but i didn’t do anything special, i just connected them and selected usb input from shift+mic 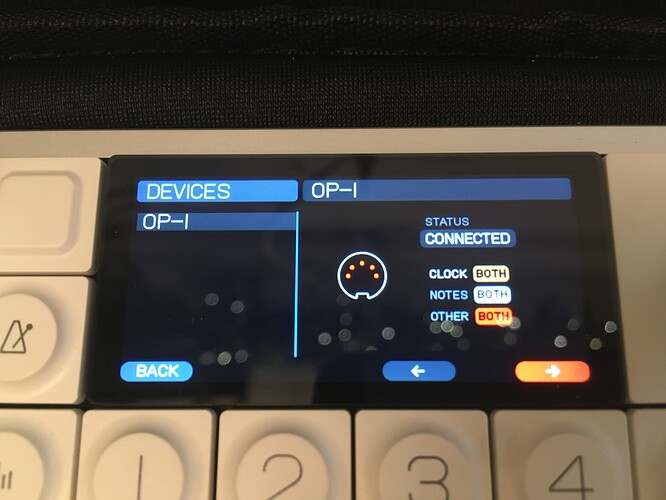 THANK YOU SO MUCH!
That worked without any issues.
Much Appreciated @systmcrsh

The sound is way better overall. And playing samples heavily transposed is WAY clearer than before.

I need to play with the tape styles. I haven’t so far. I bought OP-1f for f for fidelity after all. But agree from the videos i’ve watched that discmini sounds far more like MP3 top end lossy compression than discmini, MiniDisc was in my experience a sonically superior format to MP3’s of sensible bitrate at the time. But I think having a perfect sounding discmini would be pointless.

agree, minidisc was far superior imo. its hard to describe in words but i think it had a more squareish more sonically appealing type compression vs a glissy smeary sloppy sort of quality that mp3 has. like a dude sipping some scotch with lovely company vs a dude sitting on the couch by himself in dirty underwear drinking beer and watching reruns. ← i’m both, but i prefer sipping scotch compression. if that makes any sense

i’ll just add in the off chance that someone from te happens to read this… i think y’all missed the mark on the disc mini. if y’all decide to improve it, make it more squareish or something

Yeah I had a track I made likely 20 years ago and converted to MP3 for upload somewhere, I only have the MP3 now. There was a really thick and bright sparkly pad sound, and it’s just all artifacted garbage noise now.

so this is a pretty lazy investigation, but you should get an idea… the following waveform images are from a mono drum kit that i imported to the op1f from the og op1. they are both kicks, one short and one long. i recorded them into audition using usb audio from the op1f.

it appears that the op1f displays double the peaks. maybe because the file is mono? anyways its an unusual looking waveform display to me. i’ll probably try again with some stereo kits, but yeah something seems to be a little off about the waveform display. at least with the mono kits that i imported. 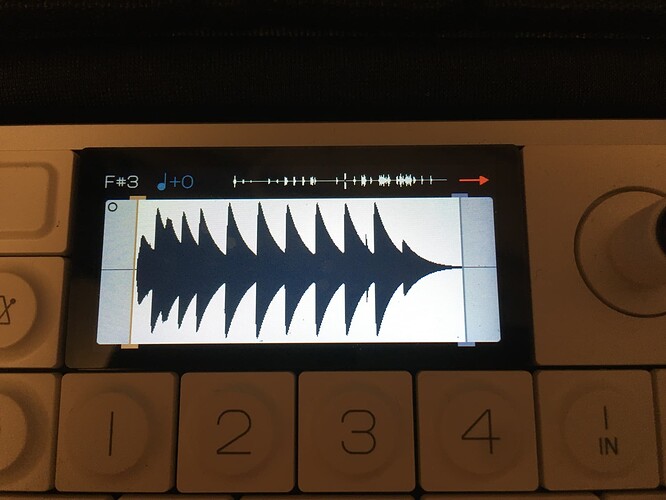 Looks like the bottom is folded onto the top. Then mirrored. Edit: better words: the absolute value of the form is displayed and then mirrored to the negative.

Which is how the stereo engine would be rendering a mono sample, right?

Posted this in the AudioBus forum, but thought it would be good here too.

I’ve been using an OP-1 F for a few days and it’s pretty great.

Much nicer build than the (already great) OG. Feels like an Apple product. The iPhone 5, specifically.

The speaker is incredible. Totally good enough to use most of the time. i prefer it to headphones.

New midi features are solid. Works amazingly well over Bluetooth LE MIDI with the OP-Z. I’ve been using the Z to sequence OP-1 synths and drums, and record them to the tape. You can even map the four encoders of the OP-Z to parameters on the OP-1 for p-locks. Could do with separate channels for midi in and out though.

Screen is much better. Not OLED, but nicer, and easier to see which tape track you’re using. Also viewable outdoors, even at default 100% brightness (it goes up to 120% I think).

USB audio interface ability—spotty. Sees my Roland R-07 as a source (stereo mics!), but not my K-Mix.

Despite being billed as a 32-bit device, it seems like that’s just the tape, and perhaps the internal processing. Samples are still 44.1KHz 16-bit, although stereo. You can load 44.1KHz 24-bit samples and they work fine, but internally-recorded samples are 16-bit only. They sound great though.

Stereo is amazing. Makes a huge difference. Although some FX are still mono. The delay, for example. A friend suggested that maybe there is a new stereo delay in the works, like the Mother reverb.

All in all, this thing is fantastic. I’ve had some crashes (still feels like a beta in some places), but this fulfills the promise of the original. Stereo, midi-synced four-track recording, nice keyboard, great IO, literal day-long battery, and the easiest sampler I’ve ever used.

Stereo is amazing. Makes a huge difference. Although some FX are still mono. The delay, for example. A friend suggested that maybe there is a new stereo delay in the works, like the Mother reverb.

A ping pong delay would be awesome indeed.

not sure if i mentioned this here already but if you want to quickly audition how different tape styles will alter a sound without actually recording it, start a sequencer and set it to hold, then load a tape and press the record button to audition it.

8 - the disc mini sounds more like a lossy 128 mp3 than a mini disc. it has a slight glissy breaking glass sound that mini disc atrac compression never really had

theres a lot to like about the field, but the disc mini isn’t one

it sounds like absolute crap imo and i’m surprised it made it into the final product. i listened to it closely with headphones today and 128 mp3 was far too generous. its more like a 32k mp3 or like an ancient RealAudio format. personally i think its unusable unless you use sounds with no high end.

when the field was announced i had hoped the disc mini would just add some subtle digital grit, but it doesn’t do anything like that. it just seems to smear any high end into a bunch of glassy artifacts.

edit i’ll try to post some audio examples in the next few days. words can’t describe how crap this tape is

Do you guys also experience quite a lot of noise and hiss with certain synth sounds? I have to turn the volume way down with some frequencies to avoid that. I never had these problems with the OG…

i haven’t noticed any noise or hiss but the volume/headphone output is a lot louder than the og. i think this was mentioned as a new feature — automatic headphone impedance or something.

it is much much louder though… when i’m using headphones (sony 7506, te m1, aiaia tma2) i have to set the volume very low otherwise its way too loud. ← not a bad thing, its just noticeably much louder.

do you get the noise/hiss when using usb audio? or into a daw?

Are you on the latest firmware?